Mashups of Fukayomi (深読み) by Nogizaka46 and Feel It Still by Portugal. The Man

Here is a short translated excerpt summary of a live stream by Sugiyama Katsuhiko and Akira Sunset that was streamed on 2021-12-18:

Sugiyama: Although Nogi has sembatsu and under, there is no ranking like in AKB elections.
Back then, with AKB’s Flying Get and Heavy Rotation, energetic songs were popular for idols.

Sugiyama felt he can’t win against people who are good at those kinds of songs. So he thought he’d just go with his own style, which was Seifuku No mannequin and Kimi No Na Wa Kibou.

The abovementioned things, plus the image and behavior of Nogi girls, was his inspiration for coming up with those songs (Seifuku No Mannequin and Kimi No Na Wa Kibou).

Seeing the image of Ikuchan playing the piano while she and the members sing Kimi No Na Wa Kibou in a school setting, without the tension of cutthroat competition – Sugiyama feels that these kinds of things are things that didn’t exist (in the image of idols) back then.

Akira did the arrangement for both of Nogizaka46’s appearances on First Take (with Endo Sakura, Ikuchan, Kakki-, Kubo Shiori) and did rehearsals with them for it
Sugiyama knows Kubo is good at singing
Akira praises Ikuchan’s singing technique and perfectionism regarding artistry

(When counting the times that Ikuchan has centered, they both count Nandome No Aozora Ka as the first and Saigo No Tight Hug as the second.)

Sugiyama says Ikuchan is a symbol. She has the technique and is genius-like. The type of person to become an artist.

Here is a translated summary of a live stream by Sugiyama Katsuhiko and Akira Sunset that was streamed on 2021-01-31:

FYI, Sugiyama Katsuhiko and Akira Sunset are two of the most prolific music composers and arrangers of Nogizaka46 songs and well-known among Nogi fans for that fact.

A video for this can be found on bilibili at:
bilibili [dot] com/video/BV11b4y1Q7F9

Nogi songs that Sugiyama Katsuhiko and Akira Sunset have composed or arranged up to the date of the live stream: 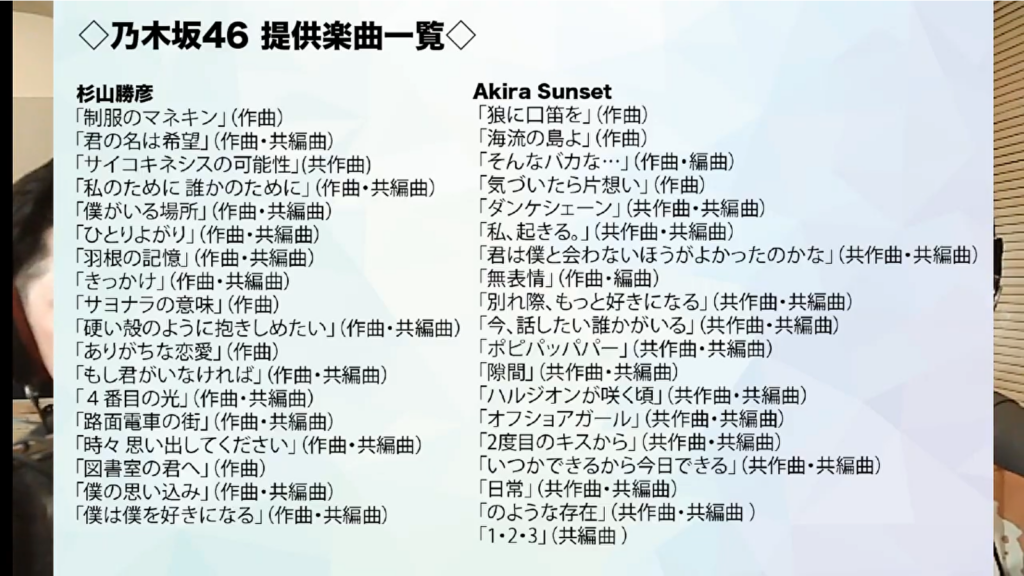 A-side singles that the two composed (Sugiyama in blue, Akira in red):

A-side singles that the two composed (Sugiyama in blue, Akira in red), continued. Since the live stream date, there has also been: 27th Single: Gomenne Fingers Crossed by Sugiyama, 5th Album Lead: Saigo No Tight Hug by Sugiyama, and Ikuchan’s grad solo: Toki No Wadachi by Akira) 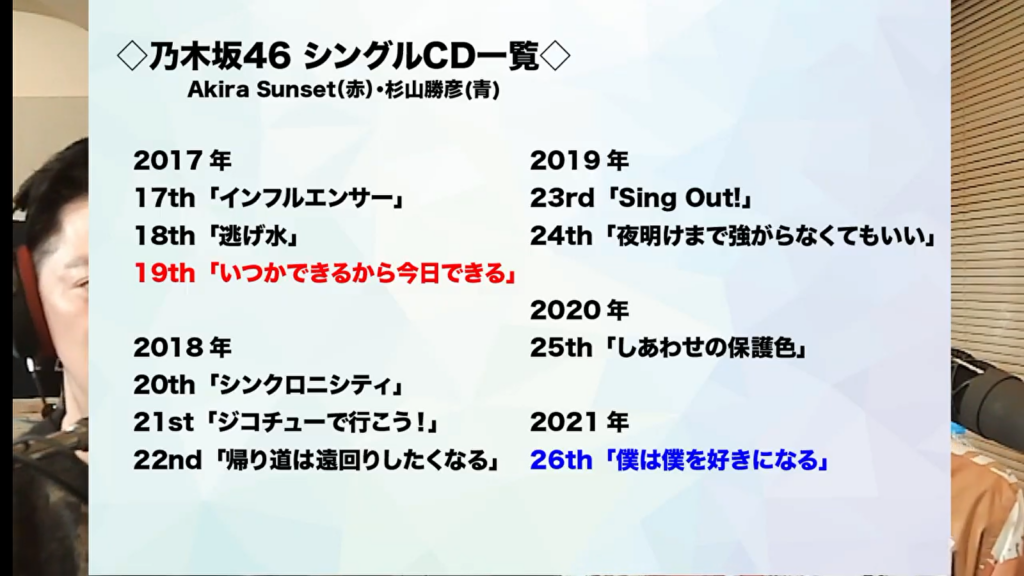 Until 2012, the concept for the music was “French Pops.” Akira says that hearing Sugiyama’s Seifuku No Mannequin was a shock to him after the French Pops era (he had already worked on Ookami Ni Kuchibue Wo and Kairyuu No Shima Yo). The shock motivated Akira to try harder to provide songs for Nogi.

While laughing, Akira says that he once tweeted why he thought “Mannequin” was so great, talking about the chord progressions, but then people in the business more knowledgeable about music theory told him, “The stuff you tweeted is musically wrong. It’s embarrassing. Delete it.”

Sing Out! was created by people in Akira’s company, where he is a managing director (basically a top executive).

Sugiyama says that the 26th single went through 4 competitions among song makers until a song was chosen (which he won with Boku Wa Boku Wo Suki Ni Naru).

Before Akira became a composer, he was a performer, mainly in rap/hip hop. Before his rap/hip hop era, his inspirations were Southern All Stars, Ozaki Yutaka, TUBE.

Akira humbly says that the song 1・2・3 was only arranged by him (not composed by him). Sugiyama says, “That still makes it one more song than me” (on the list of all songs that they have created for Nogi).

Sugiyama (on the right) plays a short improv of Kimi No Na Wa Kibou.
Akira (on the left) at 0:11: Wow, stylish! How stylish!

Album lead songs by Sugiyama: Boku Ga Iru Basho, Kikkake, Arigachi Na Ren’ai
3 out of the 4 Nogi albums
(Including Saigo No Tight Hug and the Under album, that would be 4 out of 6 album lead songs)

Sugiyama plays around with the key changes in Kizuitara Kataomoi.

They have a composer’s jam session and create a short song in 30 minutes. Akira composed the melody, Sugiyama did the instrumentation, and Akira did the singing and lyrics. For whatever reason, they autotuned Akira’s singing.

Translation:
To say the truth, I want to travel with you
But we have to take into consideration these times (affected by covid)
So I want to love you all that I can
At this place, where we always do

Akira likes Naachan and Maimai’s voices.
He was impressed by Misa’s work ethic during Sonna Bakana and was moved when she and Maimai eventually got to the front row.
Akira seems to follow Nogi’s group details more than Sugiyama.
Sugiyama likes Ikuchan’s voice.

Akira jokes that he doesn’t like to do arranging.
APAZZI works in his company. APAZZI does a lot of arranging, including many for Nogi songs.

Sugiyama’s background is mostly as a composer, but he has also been a performer, especially in 2013-2016, during which Nogi has fewer songs by him than usual. He has a bit of classical background as well thus he likes using piano. He does anything: composition, arranging, lyrics

Viewer Question: Are you not going to provide songs to Sakurazaka/Hinatazaka?
Sugiyama: If they take our songs, I’ll write as many as they wanna take (laughs). We’re always writing songs.

Question: What do keep in your mind when you write songs?
Both: The deadline.
Sugiyama: Akira once said that what creates wonderful songs isn’t songwriters – it’s deadlines.

While Akimoto Yasushi was in his 20s writing lyrics, Akira was being a rebel doing hip hop and sticking his tongue out in his album photos.
Sugiyama jokes that Akira was more like Keyakizaka than Nogizaka back then.

Sugiyama’s oshimen is Maiyan.
Akira says he’s a DD, but biased towards 1ki.

They praise Yasushi a lot for his lyrics and ability to choose songs.
(However in a different interview from Nov 2020, linked here: https://bilibili.com/video/BV1Kp4y1z7xB, Sugiyama said he’s often surprised by Yasushi’s lyrics. “Oh, these are the lyrics he put for this song I composed? Huh.”)

Akira says, “I don’t know chords,” so his arranger will polish the chords in his songs.
Sugiyama jokes that his arranger changes his (Sugiyama’s) chords, if it’s good, he’s ok with it. If it isn’t, he’ll be pissed.

They both like Influencer.
They both love Mr. Children.

Nogi singles basically officially hold “competitions”, where Yasushi chooses the final songs for Nogi.
Most of the time, there is a lot of competition.

In some cases, as in the case of Kimi No Na Wa Kibou, Sugiyama just personally proposed the song to Sony/Yasushi and that was the song chosen (without a competition).

This is 2-minute excerpt from the Nogizaka 46 Minutes TV Excerpt that was aired on 2022-03-20 on the Nogizaka Haishinchuu Youtube channel. The members explain (and prepare the audience for) some of the content of the Bluray version of the “Actually…” music video, which went on sale on 2022-03-23. 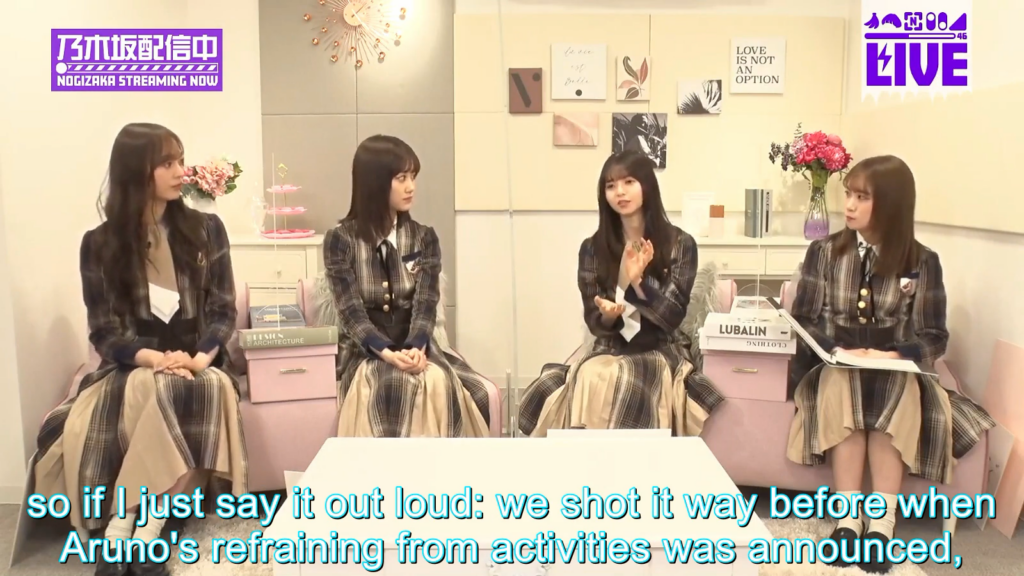 Think of it as the Chianti to go with the fava beans and the 23-minute music video.